Have you ever tried to capture your memories of Yellowstone with something other than a photograph? For Carl Sheehan, his memories are captured in clay. Carl is a professional ceramicist and has been the resident/visiting potter at Yellowstone National Park for 40 years. His pieces of stoneware and porcelain pottery are individually handcrafted and glazed before being fired in his hand-built kiln. These functional pieces are designed for visitors to take home and use in their daily lives. But their core function is to serve as a reminder of the vacation of a lifetime in Yellowstone National Park.

Originally from Michigan, Carl first fell in love with pottery after taking classes in high school. His college degree was in education and fine arts, but his passion was pottery. Carl’s love for Yellowstone started when he came out in the 1970s to visit a friend who lived in Silvergate, Montana (just outside the Northeast entrance). In 1975, his soon-to-be wife moved to Bozeman for school and he followed. After a brief stint teaching school in Wyoming, he moved back to Montana and has been here ever since.

His journey to becoming the first potter in residence in the national parks started at a craft fair in Bozeman when he was approached by the director of the gift shops. In the late ’70s and early ’80s, the Park Service encouraged the Yellowstone Park Company (later TWA Services) to bring local artisans to the park. After describing the materials, space, and equipment needed to build a kiln, along with architectural renderings, his plans were approved, and he and his family moved to Old Faithful in June of 1980. “I was a little nervous. I thought, well, this is a big commitment of building a kiln. I’m moving and bringing my wheel and everything down. So I had a three-year contract for the first three years in the park, and after that, it was just kind of word of mouth, and it ended up being 27 summers.”

In a truly serendipitous way, being the resident potter at Old Faithful was meant to be for the owner of Fire Hole Pottery. Most people assume the name of Carl’s business comes from the Firehole River that runs through Yellowstone. However, Carl named his business before ever working in Yellowstone. The name is derived from the hole in a wood-fired kiln. “Where you throw the wood in is often called the fire hole or stoke hole and …I just thought the name made sense for a business.”

Living in the park along the Firehole River for nearly 30 summers has given Carl plenty of material to draw from. For instance, one day, he and his family pulled into their driveway and saw a black bear. They observed it going down towards the Mallard Lake trailhead and, rather than cross the bridge over the Firehole, the bear decided to walk across the river on a log. “It burned in my mind what a cool scene that was – the bear in the middle of the Firehole on this sloping log.” Two weeks later, that exact scene Carl witnessed ended up on a casserole dish.

While specific experiences can be depicted on a piece of pottery, Carl relies on his glaze palette to capture the true essence of Yellowstone. He uses an impressionistic mountain motif of Sky Blue, Red Skies, Turquoise River, and Moon Over Montana Obsidian Black to convey the colors of the park. Since Carl specializes in high fire stoneware, he relies on a kiln to finish his artwork. “The beauty of being a potter…is that you give all this up to the kiln, and it does its thing to these pieces… it does stuff that you wouldn’t necessarily have done or thought about doing. That’s what I enjoy most about the firing I do is letting the kiln add to my artwork with the fire and the heat and the atmosphere.” Carl fires using a gas-fired kiln that he built himself. It takes one day to fire it up to 2400 degrees and another day to cool it down slowly. One firing can hold about 250 pieces. The magic of pottery is opening that door and seeing what is revealed. It can be stressful, knowing that if it is opened too soon, everything falls apart and breaks. But it is also rewarding. “It’s what keeps it interesting…there’s a lot of variables that can change and alter and sometimes frustrate you, sometimes surprise you, and do things that you had no idea you could do.” The beauty of owning a piece of pottery is knowing that each item has its own unique character. No two pieces are exactly alike, even if they were fired together.

Carl may use gas to power his kiln, but it’s the energy of Yellowstone and its visitors that powers his inspiration. “I always felt more alive, more energetic while I was working in the park for the summers. Maybe it’s just me and the fresher air and all the energy of the people that come there, but that’s definitely something that kept me coming back for all those years.” 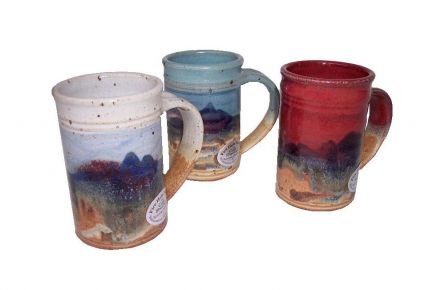 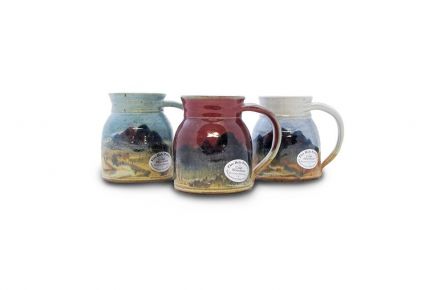