Across the world’s first national park, Mother’s Day sees Yellowstone mothers welcoming the arrival of warmer weather and, with it, the greater availability of food that lets them provide easier for their children. 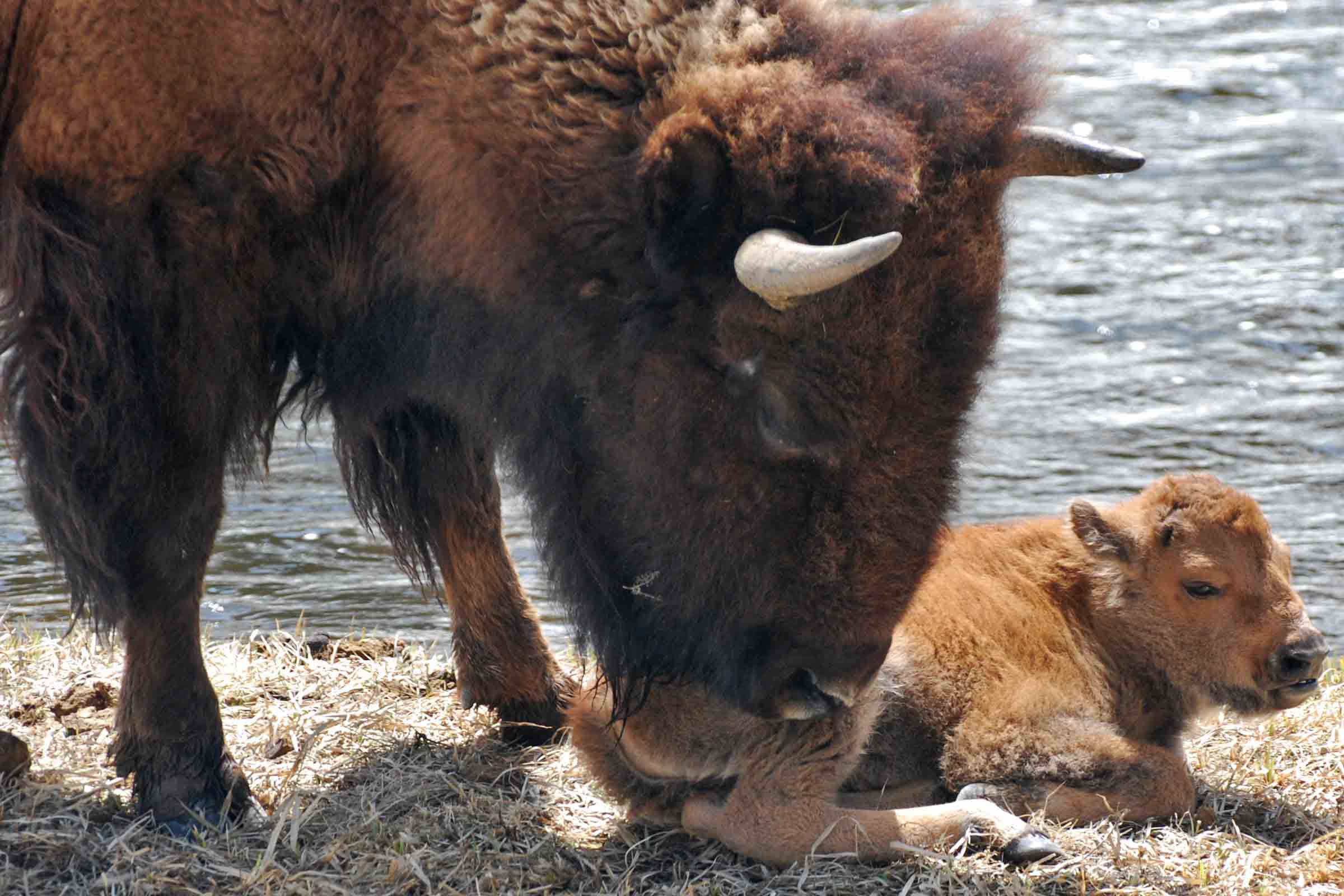 Like with most of our wildlife, for our ungulate species spring is the time to welcome new births. Bison, elk, moose, pronghorn, bighorn sheep, mountain goats, and mule and whitetail deer females spend the winter pregnant, surviving the rigors of the toughest season while developing their calves and fawns. April and May brings their pregnancies to term. Most ungulate calves can walk and keep up with the herds within an hour of birth, while their mothers will still keep them bedded down for much of the day during their first few weeks, until they begin to wean and feed on their own. For some mothers, like our bison, motherhood is a year-round job – some cow bison will not have weaned their infants fully until the following March, and then they give birth to a new calf a month later! The predators, like wolves and bears, are also raising their young at this time of year, although for bears, the situation is complex. Bears have their mating season in June, but by a process called delayed implantation, the fertilized egg will not implant in the uterine wall of the sow (female) for months after. When she’s ready to enter hibernation, if she’s healthy, the egg will implant and begin to develop (if not, it’s reabsorbed, terminating her pregnancy to protect her). She gives birth to 1-4 cubs in her hibernaculum in January. A pound or so at birth, hairless and blind, her cubs nurse while she sleeps out the winter, before emerging in spring with bouncing baby cubs near the time that wolves are giving birth as well.

Fun Fact: When wolf pups reach the age to start trying solid food, they first do so by licking the mouth and face of adult wolves, which causes the wolves to vomit partially digested meat for the pups. This same behavior is, in fact, why domestic dogs lick your face…

These predators are wonderful mothers, protective and supportive, but here in the wilderness, that means, besides nursing their young and keeping them from harm, introducing them to the foods they’ll eat for their lives. Which means many of the calves of the ungulates end up as food for the predators, both juveniles and adults. In fact, less than 50% of the elk born in Yellowstone each spring will ever see a year of age – during the time they are bedded down for much of the day, they fall prey to the predators, and even once they’re more mobile and can keep up with the herds they’re still an easier catch. While this may seem harsh, it’s how the wilderness functions, and the plants the ungulates feed on are able to grow and produce their own offspring thanks to the predators preventing overgrazing.

Besides the mammals, many of Yellowstone’s avian species are readying their nests for arrivals as well. Bald eagles have usually hatched eaglets by Mother’s Day, and the other species range wide from this date – not too many earlier, most later into late spring and early summer. But the arrival of our birds is a harbinger of it all for many Park employees, keeping watch for the first mountain bluebird, osprey, American white pelican, and sandhill crane of the spring.

Honor thy mother this Mother’s Day: bring her to Yellowstone National Park to visit with the wilderness mothers, and to share in the wonders of motherhood true across species and outlooks. Listen as an elk calf calls out to its mother (NPS audio):

Leslie J. Quinn is Interpretive Specialist for Yellowstone National Park Lodges. Starting as a tour bus driver and guide in 1980, since 1988 he has been the trainer of the Park’s guides and still rarely, when he can escape from behind his desk, a guide himself.